In addition to rewarding the work of professionals in the television industry through its annual Emmy® Awards, The Pacific Southwest Chapter of the National Academy of Television Arts and Sciences also encourages students preparing for careers in the industry through its scholarship program, which is open to students in television-related disciplines in area colleges and universities.  Since the inception of the Scholarship Program, the Chapter has awarded almost $300,000 in grants to students preparing for television careers.

Scholarships are granted for use by undergraduate students enrolled in 9 units or more and graduate students enrolled in 6 units or more at two- or four-year colleges or universities for the coming Fall or Spring school year.  Student must be a resident of the Pacific Southwest Chapter Area (San Diego, Las Vegas, Bakersfield, San Luis Obispo, Santa Barbara, Santa Maria or Palm Springs) at the time of application. Students should intend to pursue a career in television and related fields.  Although we are looking for students who are good scholars, evidence of creative achievement and demonstration of financial need is even more important. 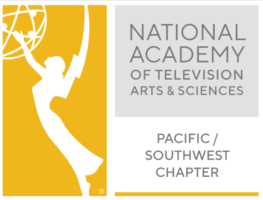