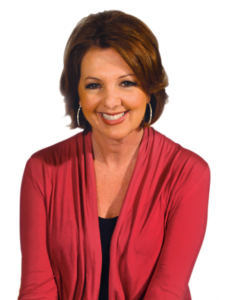 Broadcast journalist and author Jane Mitchell is a 27-time Emmy® Award winner . As a child, she traveled the world with her Navy family and was inspired to write by her school teacher mother. While watching a reporter covering the Middle East peace talks, she declared to her father, “That man travels the world, tells stories, is on TV, and gets paid for it, that’s what I’m going to do.”

Jane graduated with political science honors from the University of California San Diego and earned a masters degree from Northwestern University. Her first reporting jobs were at KAUZ-TV in Wichita Falls, Texas and KOTV in Tulsa, Oklahoma. She returned to San Diego in 1991 to care for her father, diagnosed with ALS. She was soon hired by KNSD as a writer, weekend reporter and show producer.

In 1996 she joined Cox Communications to lead the creation of a special non-partisan 14-day channel dedicated to the Republican National Convention in San Diego. She was a key member of the team that created Channel 4 San Diego, the TV home of the Padres from 1997-2011.

For 15 years at Channel 4, the program “One on One” with Jane Mitchell, gave viewers an in-depth look at sports figures, up and coming stars and legends for the San Diego Padres and Chargers. Even though she did not grow up a sports fan, Jane’s style and “One on One” are credited with helping to connect players and fans with shows considered part of the region’s sports archives.
Her other roles at Channel 4 included: lead producer/writer for “Cox Presents: A Salute to Teachers”, co-host of “Forefront,” and producer and/or host of various special programs.

In 2010 she published “One on One – My Journey with Hall of Famers, Fan Favorites and Rising Stars.” The foreword is penned by sports legends Dick Enberg and Tony Gwynn.

In 2012 Jane launched One on One Productions, covered the Olympics in London, and now offers services including custom productions and personal biographies.

In 2018, with Trevor Hoffman’s election into the National Baseball Hall of Fame, she launched the website, “Countdown to Cooperstown.” She collaborated with Cox to air archived Hoffman editions and produced her own Emmy-nominated One on One edition featuring the hall of famer.

Jane served on the NATAS PSW Board and was Vice President from 2002-2006. She has used her television platform for her volunteer work with the ALS Association in honor of her late father who died of Lou Gehrig’s Disease in 1994. A single mother by choice, her most prized production came in 2013 when she delivered her daughter, Lily Ann.