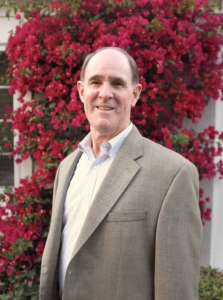 Multiple Emmy Award recipient Don Benke’s career in Broadcasting can pretty much be summed up as KPBS-TV’s Studio Supervisor. From 1972 through 2019, no one else held that position besides him. He was also the “Crew Chief” at KEBS, before the station received PBS status. His time there began in 1969 with turret lens black and white image orthicon cameras, and hand me down equipment from CBS. Don helped KEBS become KPBS and join the world of color television.

Studio supervisor at KPBS was a position that included a wide variety of duties, including lighting, set design and construction. Don was also in charge of hiring and supervising around 20 student assistant crew members each year. Training, and working side by side with these young people, handling camera work, audio, technical directing, floor manager, makeup “artist”, and countless other assignments over five decades never allowed his job to become stale. The assortment of duties, were different every day, and with a new crew every year or two, it was a constant challenge that kept Don engaged. He was always busy with new things to learn and problems to solve to keep him forever young.

Highlights for Don over the years included the great honor to have worked with nearly all of the KEBS/KPBS original founding staff including John Witherspoon, Paul Marshall, Paul Steen, Brad Warner, public affairs journalist Peter Kaye, and of course San Diego television icon and fellow Gold Circle member Gloria Penner. Don always enjoyed meeting and talking with guests at KPBS from the great Aztec/Chargers coach Don Coryell, to civic leaders like mayor and later Governor Pete Wilson, and dignitaries and community leaders from the arts and sciences, including philanthropist Darlene Shiley. An Aztec for life, Don always enjoyed working with the original voice of the Aztecs and great guy, Ron Reina, and current voice Ted Leitner.

Not many people and projects went through the KPBS studio without Don being present he could be found working on sets or lighting or there to greet and welcome guests. Nearly every live KPBS-TV Telethon produced in San Diego from 1975 to 2017 was staged and lit by Don. He also staged and lit various other telethons and productions that were produced in the KPBS studios. After retiring from KPBS, this past January, he has continued working on programs for a number of other studios, including the “Your Money Your Wealth” program. But really, Don says he is ready to retire, and travel with his wife of 48 years, Justice Patricia Benke.