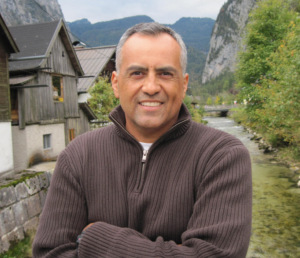 Salvador Rivera is a life-long resident of San Diego. He grew up along the border in San Ysidro and graduated from Mar Vista High School in Imperial Beach in 1982. An opportunity to play baseball at San Diego State University drew Salvador to the school. Five years later, he got his B.A. in Journalism from SDSU.

During Super Bowl week in San Diego, in January of ‘88, he landed his first job as a desk assistant with KGTV. He would go on to become an assignment editor, associate producer and ultimately a reporter. He also gained experience in markets such as Fresno, Las Vegas and Los Angeles.

Salvador has worked in the television news industry for past 30 years. He has been awarded six Emmy Awards. Currently he is a freelance reporter with Fox 5 San Diego. During his career he has covered stories such as the Santana High School Shooting, Hurricane Katrina, the Cedar Fire, the abduction of Danielle Van Dam, drug cartel violence in Mexico, and Baja’s total eclipse. Along the way he has interviewed newsmakers, professional athletes and dignitaries like Mother Teresa, George W. Bush, Mexico President Vicente Fox, the Dali Lama, and Oscar de la Hoya.

One of his exclusive series of reports led to the passage of Congressional legislation known as the Holley Provision, which enables the dignified return of our fallen military heroes to their families and loved ones.

Salvador exposed the corruption and hypocrisy in the medical marijuana industry showing how easy and simple it was to gain pot prescriptions. Another investigation uncovered how the City of San Diego sold several acres of land in Barrio Logan to a developer for $100. As a result of the piece, the city was forced to retake control of the property and eventually build what is now the Mercado Project.

Throughout his career he’s always found ways to give back to the community. He served on the board of directors of the Community Youth Athletic Center in National City where boxing was used to get at-risk youth into educational programs and ultimately universities such as Princeton, UCLA and Johns Hopkins. He also served on the board of directors for the O’Farrell Academy. Here, his work helped turn a middle school with diminishing enrollment into a K-12 Charter School that has become the pride and joy of San Diego Unified. He was a volunteer varsity baseball coach at Castle Park High School in Chula Vista. To this day he continues to read and speak to students, primarily in the South Bay, about the virtues and opportunities found in Journalism.