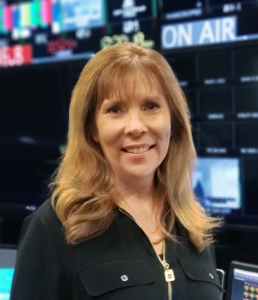 Kerrie has also volunteered on both the Emmy Awards and Silver Circle Committees designing invitations, programs, ads, and other graphics throughout the years.

Kerrie graduated from San Diego State University with a B.A. in graphic design. It was while she was at SDSU that she took an internship at KCST-TV, in the art department which launched her career of over 33 years in the industry and with NBC.

When not at work, her passions include taking her to dog beach, skiing the slopes of mammoth, horseback riding, and spending time with friends.