I have always been a sports guy.  I got hooked in high school and went to the University of Oklahoma to become a sportscaster.  My dad, a lifelong banker, didn’t see a future in that and had me enroll as a journalism and business double major because he was paying the bills. 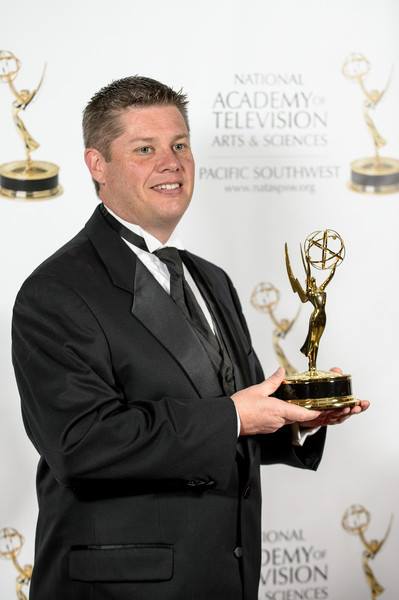 While writing for the Oklahoma Daily newspaper, I did a profile piece and interviewed Dean Blevins, an Oklahoma City sportscaster. Blevins said they needed sports interns, and I got my shot at KOCO-TV.  I learned to write for TV, edit video and create a rundown.  On Saturdays and Sundays, I did the sportscasts that played overnight or on our weekend morning show.  My boss was Mick Cornett, who is now Oklahoma City’s mayor.  Mick told me I was not going to make much in sports, but that I should jump over to news.  Mick was right, I jumped to news and moved from editor to AP to producer.  I was there for 5 years.

My next job was in Kansas City at WDAF. They were soon switching affiliations from NBC to FOX.  I helped start a 9 p.m. newscast.  I knew a little bit about a lot of stuff. They needed help with computer systems, live shots and graphics.  I produced sports shows, the Oklahoma City bombing and the O.J. Simpson trial coverage.  When Senator Bob Dole ran for President, I followed him everywhere.  I loaded up a minivan with equipment and drove to Iowa, New Hampshire, South Carolina and San Diego. I set up for our political reporter and anchors to fly into town and do live reports.

About the same time, a buddy from KOCO called and said he was starting up a FOX station back in Oklahoma City. I left Kansas City to build a newsroom at KOKH. After about a year, we were on the air and my role switched from builder/fixer to show producer.  It was time to move on.

I liked San Diego when I was here for the Republican Convention. I didn’t have a lot of experience on the assignment desk, but things worked out at NBC 7/39.  I quickly moved from the desk into management.  I’ve been lucky enough to work with great people through tragedies like wildfires, terrorist attacks and kidnappings. I’ve also had the pleasure of being involved with coverage of fun events like the Olympics, Super Bowls and airshows.

San Diego is where I met my wife.  We have two smart and beautiful daughters.   NBC 7 has introduced me to great friends and co-workers. I’ve worked with, and competed against people who really care about serving the community.  San Diego is now home after almost 18 years at NBC 7.